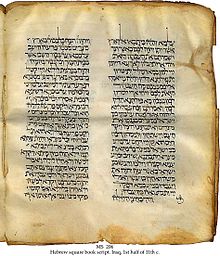 " All Scripture is God-breathed..."
St. Paul


I've been giving some thought to this, lately.

For most of my life I was taught, and accepted, that the Bible was "divinely inspired".  In my cultural tradition, this meant that every word in it was perfectly, literally accurate.  Six days to create the world.  Infallible history.  And every verse like a magic spell that could bend reality to fit the "correct" way of thinking about things.

I was even told that translation errors could not occur - because God was watching over His Word.  If just ONE verse turned out to be false, well then, you wouldn't be able to trust ANY of it!!  And woe betide anybody who dared twist it, or change even so much as a punctuation mark!

When you think about it - this has to produce a fearful kind of faith.  It implies that there is one
correct way of viewing God, faith, and the world - and that any little deviation from this prescriptive "truth" could be dangerous.  It also uses the Bible as a kind of rule book for thinking.  "Here - put your mind in this nice, neat straitjacket, or you'll miss seeing God!!"  It makes it more like a pair of blinkers, than a window through which to glimpse eternity.

The Bible is a remarkable collection of writings.  As Lee Strobel points out, in his book "The Case for Christ", as far as ancient documents go, there are multiple times more matching copies, (and these are hundreds of years closer in date to the original events, people and places) than there are of Homer's writings.  As far as the authenticity of ancient documents goes; those are damned fine credentials.  However it's a HUUUGE leap from this, to the kind of rigid fundamentalist view of Scripture that I grew up with.

The Bible is a collection of ancient texts, written by and for people from ancient, foreign cultures, in languages that are no longer used in the same form today.  It records encounters between these people and cultures and the I AM.  Because it was written by real people, it is earthy, untidy, coloured by culture and perception, and fabulously rich and confusing.

The Bible (in spite of containing the Jewish ceremonial and religious laws) is not a "rule book for thinking".  Not every word of a translation is some kind of magic spell.

But it points to a reality.  In its pages we find accounts by strangers from another time, of the stirrings of God in their world.  We may never fully understand the perspective of those strangers.  We cannot leave our own culture and sit fully inside theirs.  However, woven into the fabric of their writings  if we have eyes to see, it is possible to discern something of the shape of the eternal and divine.

The narratives, poetry and other writings in the Bible point to a God who can be encountered, and wants to encounter us;  a God who will be found by those who seek Him.  Over and over again, we read the words of people in times and cultures past, who encountered the breath of God in their world;  which sounds a lot like Divine inspiration to me.  The thing is, though, to actually experience the divine, we have to seek such an encounter for ourselves.