Why I'm not Left or Right wing 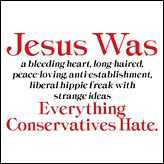 Lately, I have been involved in a number of conversations that have touched on liberal, vs. conservative values.  The home I grew up in was fairly conservative (although my parents were thoughtful people, and didn't always tow the "party line"), but over the years, I have come to embrace ideas and values that would be seen as much more liberal or left wing.  Despite this, I'm not comfortable with the label.  I'm not exactly a fence-sitting moderate, either - but  I remember telling a friend years ago, that I felt "Left" and "Right" divisions in politics were kind of artificial - and not on the matrix I wanted to use.  I couldn't explain it better (& luckily, my friend didn't ask me to).  It keeps coming up, though, so I want to nut it out a bit more clearly.

I think we are all inclined to interpret Jesus according to our own values.  (Heck, we are inclined to interpret EVERYTHING that way!!)  I and plenty of others have often pointed out that Jesus was not exactly a moralistic, conservative fellow, in spite of the way he is often presented.  But was he really a kind of 1st century hippie radical freak??  Did he even fit anywhere on the Right/Left continuum??

If you look at the people who were drawn to follow him, we don't find any clues.  There was Simon the Zealot (about as Palestinian Left Wing radical as you could get!) and Matthew the Tax   Collector.  How on earth did THOSE two manage to get along??

If you look at the things he did and said, it's just as confusing! He starts out providing gallons of wine to already drunken wedding guests, then tells his listeners that they need to keep the laws better than the scribes and pharisees.  He tips the tables of merchants and salesmen over, then affirms the gift of perfume worth a year's wages - poured over his own feet.  He provides food to thousands, then appears to deny even bread, to a Canaanite woman, & on the basis of her race, no less!  He had no home of his own, yet his robe was so valuable that soldiers cast lots for it.  He railed against the unjust rule of the religious leaders;  then appeared to casually give Rome it's due.  I'm pushing the comparisons a bit far here, perhaps, but I want to make a point.  Jesus was deeply concerned about the plight of the poor and marginalised, yet he does not fit neatly onto the right/left continuum we so readily place people on today.

The truth is, Jesus placed as much value on lepers and outcasts as he did on Roman Centurions, (and even the occasional religious leader).  And I think that's the "door to the matrix".  Jesus wasn't about taking sides.  He wasn't about moral codes.  He never laid out a coherent philosophy for us to follow.   Jesus was all about relationships.  He was there to connect with people, and to show them their true worth, connecting them with God and their own true identities.

When you think about it, the whole right/left wing divide is not really about justice - everyone values that (although they may have differing ideas about what it is).  It's only about two things;  power, and resources.  And of these two things, power is only important insofar as it decides who gets control OF the resources.  So really?  It's about resources.  Money.  Do I want to line up on one side or another with regards to money?  Not really.  Do I want to value people as people (no matter what their leanings) and find means and ways of creating justice in community with others?  Well, yes.  I think I do.


Incidentally, a fellow blogger (Joy, of Joy in this Journey) posted something today which really resonates with this whole discussion... I always enjoy TED talks, and this one, by Jonathan Haidt, manages to hit the same spot, from a completely non-religious viewpoint!  I loved it!!