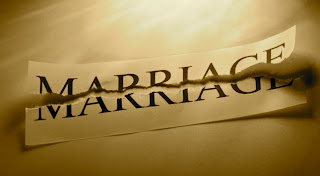 Lots has been coming my way, about the institution of marriage.  I was recently sent an email, with links to pro-marriage information.  This was a response to current legislative changes being debated, regarding the legal definition of marriage.  Another friend had a bit of a vent on facebook this morning, about married men she had heard speaking incredibly disrespectfully of their wives...  and of course, for me, the subject is very personal - as my marriage is ending.

Some interesting stats were quoted in the pro-marriage article.  (I seem to have come across a LOT of statistics about marriages, lately!)  The general picture seems to be that children of intact marriages (as well as the marriage partners themselves) generally experience measurably better health and life outcomes, than children of either single parents or defacto relationships.  As a social institution, marriage seems to have something going for it.

However as someone who is kind of on the other side of that nice, conventional coin...  I think an honest look at marriage has to see more than generalities.

So, what is it about functional, intact marriages that works so well for both children and adults?  (and notice I added the word "functional" - since it is recognised that children from high-conflict marriages (with or without physical violence) do NOT do better than children from other family configurations.)

Bear in mind, this is just me thinking this through;  I'm not listing research based evidence here, just my own thoughts, in no particular order.

1.  One of the points made in the "pro-marriage" article, was that "It is in resolving the innate tension between the male and the female that men and women learn to love."  I actually think there's something in that.  Love needs to be learned, and it is in adjusting ourselves to the difference of another, that we find both them and ourselves.  Children who grow up in a home where they see the accommodation of one to another modeled, and find themselves included in such an accepting and respecting circle, have been given a wonderful gift!  However, is marriage between a man and a woman the only way accommodation to others can be learned??  Much as I think a healthy marriage is a beautiful and wonderful thing, I suspect not.

2.  Stability and faithfulness;  commitment, if you like, are so very important.  Growing up knowing that those who love you are committed to keep on loving you, even if times get difficult or someone makes hurtful mistakes;  that's gold!!  I can't prove, but I think perhaps it is reasonable to assume, that married couples in general do have intentions to be together "for life" even though it so often doesn't work out that way.  De facto relationships range from casual to committed.   Although marriages also range from  deeply committed to "on paper" only, I think probably most people who take the step of marriage believe they are making a lifetime commitment.

What am I trying to say here?  Well, growing up in a covenanted, faithful circle of relationships is healthy.  By covenanted, I mean that there is a heart commitment to be there for one another, no matter what.  And that commitment is held deeply enough to carry the relationship through difficult or dry times.

I think covenant, heart commitment between human beings is one of the most beautiful things in existence.  I believe it confers value on people, as people.  It says "you are precious to me, even when you make mistakes, don't meet all my needs, or are just plain difficult."  Everyone needs that!  Kids who grow up seeing that in action, are going to feel so much more secure.  Even when things go wrong.  They've seen love keep going before.

So is marriage the only place you can find "covenant commitment"?  Not at all.  It SHOULD be the one place you can expect to see it consistently - although it probably isn't.  I have friends who I have "heart commitments" to, that have lasted through squabbles, tragedies, heartbreaks, and occasional bad behaviour on both sides.  These are people who nurture my soul, love me AND my kids, and who are there for me, and I for them, when sh** happens.  They are my community, and part of my family.

3.  Healthy traditional families are wonderful things.  But it isn't always possible for people to live in one.  What about families where a parent dies? What about families where mental illness, addictions, or other factors make the traditional family arrangement un-healthy (research is actually on my side on this one)??    And what about individuals who stay single?  Or who have a different sexual orientation?  If traditional marriage is the ONLY way to provide love, security, commitment etc., then large portions of our society are sunk, through no fault of their own.

I guess what I'm saying, is that marriage can and should be, a wonderful, precious, life-affirming, nurturing, safe, sacred thing.  But sometimes it isn't.  And that's not the end of the story.  For those who (for whatever reason) do not have, or have not had, the benefit of a stable, traditional family life, there are a universe full of opportunities for honouring, nurturing, covenanted relationships.  And even if you are happily and healthily married, community and friendships outside that primary relationship are so very important.

You can't legislate good relationships.  And you can't stereotype them either.  Love (the committed, through thick and thin kind) is as important as air.  And just like air, it can be found all around us.