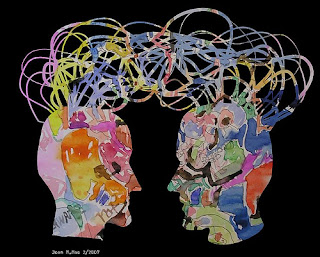 I had planned to write about something else today, but there's a conundrum gnawing at my brain, and it won't let me go until I tussle with it, so here goes...

This week, I posted videos by two quite different thinkers, Peter Rollins and Alain de Botton.  Rollins is a Christian theologian.  De Botton is an Atheist philosopher.  In spite of this, the two have something in common.  I think the "something" is listening (which was also the something I had planned to write about today).  They are both men who are prepared to listen, and, even more than listening, to actually evaluate their own beliefs and behaviour through the perspective of the "other".

And for me, the thing I find utterly compelling when I listen to both is NOT their agreement, but the jagged dissonance that exists between them.
(And that's not a criticism.  If you asked either of them, I suspect they might say the same)

De Botton is seeking to take some of the 'consoling' and 'healthy' aspects of religious observance, and use these in a secular way.  He mentions "community around a shared set of values", "ethics", aspects of rhythm and intentionality, and in particular "silence and space" as valuable aspects of religion.  He seems to wrap all of these loosely within the terms "consolation and meaning".

Rollins, however, seems determined to explode all "consolation and meaning", and have us all embrace pain and nothingness!  He does not seek to find value in religion at all; but to wipe the salve of religious certainty from every person he can.  He does not believe that Christianity is "the true religion", rather, he sees it as "a splinter in all religions" (I'm with him on that, by the way).

It's not that Rollins sees no value in consolation, or that de Botton is trying to escape angst.  I think both of them live examined lives.  And I think both of them probably see the necessity for rest and "escape", at times, from all the examination!  However (and I wonder what de Botton would say in response to this) I am irresistibly drawn to the dissonance between the two views.  For me, this very dissonance represents something authentic, raw, and seminally human.  I'm arrested by Rollins' idea, that our thoughts, rituals and creeds are very often something we use to mask what we truly believe - and that it is only in our behaviour that our true beliefs are revealed.  Without the perspective of an "other", we very often remain unaware of our own inner workings.  And if we never truly engage with our own inner selves, we remain merely ideas about ourselves;  artificial and inauthentic.

In this sense, our true selves reside in the dissonance between views;  in the rupture between our own ideas about who we are, and those of the "other".  This makes truly listening something much larger than "empathy" or "mutual understanding".  It's uncomfortable.  It's disturbing.  And I believe when we engage in real, honest listening - both to others, and through them, to ourselves - we are never more present, alive, and fully human.

New comments are not allowed.