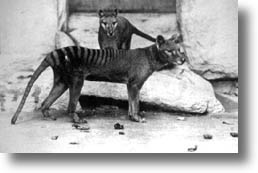 Okay.  Here is where you get to see what a complete ninny I can sometimes be... but there's a point to this!

A while ago, a friend told me the story of having sighted, some years ago, a Tasmanian Tiger (Thylacine) in the bush near Bargo, NSW.  For those who don't know the Highlands, Bargo is not far from where I live.  Now Thylacines have been extinct for the best part of a century - so in spite of his attestation that both he AND his father had seen the animal and been sure of its identity - I was not convinced.  However the story kind of stuck in the back of my mind.

Last week I worked 5 days in a row in a lovely country school, and enjoyed the beautiful drive through the bush every day to get there.  On the first day, I noticed a dead animal by the side of the road, on one of the bends.  It looked much like a dog, but dark in colour and appeared to have some stripes.  For some reason, the idea formed in my mind that it looked rather like a Tasmanian Tiger.  I pushed the thought away, but it kept coming back.  After driving past it several days in a row and deciding it really didn't look like a dog, I decided I should investigate - just in case I really happened to be driving past the zoological discovery of the century!

So, on my way home from work on Wednesday, I drove slowly, looking for the bend where it had been lying.  At last, I found it.  I found a safe place to pull over.  I took my phone, to take a photo if it really was something unusual.  As I walked closer and began to get a better view, I burst out laughing, put my phone back into my pocket and got back in the car.  It was...  a blown tyre.  That's right - It wasn't even an animal!

The oddest part of the story, is that for the following two days when I drove past it, it no longer looked like a dead mammal.  It looked just like a tyre!

Isn't that the most frustrating thing about human perception?  We "see" according to our preconceived ideas.  Sometimes (as in the case of my mistaken zoological "discovery") it is possible to get up close and either confirm or disconfirm our preconceptions.  But not always.  So how do we know we can trust our own perceptions?  Well, I think it is safest to say that we cannot!  Perhaps it's a good reminder to hold our impressions of "what is" loosely!

Oh, and in my defence, I should tell you that I had misplaced my glasses...
Posted by Kerry Miller at 7:47 PM

Email ThisBlogThis!Share to TwitterShare to FacebookShare to Pinterest
Labels: perception