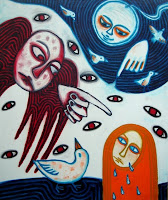 I read/watched something incredibly disturbing this morning on ABC online news.

A government "boys home" in Tamworth, NSW, has apparently spawned a generation of heinous killers.  Former inmates have been linked with 35 deaths and an alarming number of Australia's most notorious and depraved criminals, it turns out, spent their teenage years there.

Former inmates (now old men) recount some of the treatment they experienced as a matter of course, during their time at Tamworth.  It's chilling, to the core.  Systematic isolation, rape, torture, starvation...  the effect on those already very troubled kids is incalculable.  Yes, they were already on a criminal trajectory - but even a week of the treatment meted out at Tamworth would be enough to push a healthy individual over the edge.   If you have the stomach to read it, find the article here.

It presents a very different facet to some shocking Australian atrocities.  Here's just one example:  In
1973, Kevin Garry Krump and his accomplice, Ian Baker, premeditated and carried out the abduction, torture, rape and murder of Virginia Morse.  Together they tortured and systematically raped Mrs Morse for some 20 hours, before finally shooting her in the eyes.  The crime was (rightly) considered so heinously depraved, that Krump's file was stamped "Never to be Released".  I was just a kid in '73, so don't remember it in the media - but I have no doubt there were calls for the death penalty to be reinstated!    Krump "survived" 6 months of torture at Tamworth, at the age of 18.

Was Krump a monster??  Undeniably, yes.  Was he also a tormented human being?  No doubt.  I'm not even laying the whole blame on the institution at Tamworth (horrendous, beyond all belief, as it was).  Krump, and the other kids sent to Tamworth had already been labelled "uncontrollable" before ever arriving there.  The specific events in their lives leading up to that point, we will probably never know.  Safe to say, however, that at some point in his life, Kevin Garry Krump - monster in the making - was an innocent caught in a cycle of violence and abuse, bigger than himself, his family of origin, or the inhumane "system" of which Tamworth was a part.

Makes me wish I could get back in time to the young Kevin Krump, and get him out of there!  Makes me weep for the untold stories of kids I knew at school (always in trouble - "those Tahmoor children's home kids!!" ) who had the misfortune to live in a government institution, instead of a loving family.

Makes me go a little easier on myself, for the times (& there have been some recent "doozies") where I've been the one to really f*** things up!  Not "easier" in the sense of believing it doesn't matter.  But easier because I know I'm human.  I have a story.  And broken bits.  Just like everyone.  That gives me breathing space to let it go and move forward.  Forgive myself, and move back into love.

And it definitely makes me take a step back from judging those other "difficult people" in my life.  Isn't it always the case, if you have the blessed experience of resolving a misunderstanding with someone, that seeing "their perspective" - really seeing it - seems to shed an entirely new light on whatever the difficulty?   Doesn't mean there's nothing to resolve.  Doesn't mean behaviour (usually on both sides!) doesn't need to change.  But it DOES mean there's space to work it out with compassion, understanding and love.


(Photo credit:  http://my.opera.com/jonrod/blog/index.dml/tag/judging%20others)
Posted by Kerry Miller at 10:20 AM