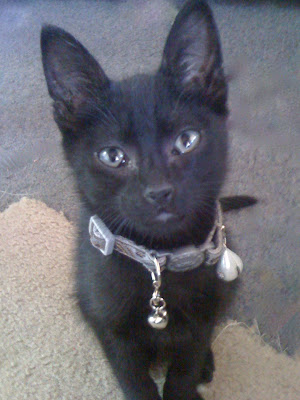 This is Nundu.
He's the newest addition to the Whalen family.  We think he's about 10 weeks old (though his size is more like 6).  He was rescued from the local dump, and ended up coming to live with us.  Specifically, he was adopted by my 12 year old daughter, Hannah.  "Nundu" is a Harry Potter name (Hannah is a mad-keen Harry Potter nut!! Apparently a Nundu is some kind of scary, leopard-like magical creature with very bad breath!).  The name is a kind of Hannah irony.  She doesn't see him that way at all!

When we first met Nundu, he was pitifully thin, had runny eyes, worms, and fleas.  Oh, and there was poo stuck in his fur.  We took him for a vet check (a bit worried that the eyes might be infectious as we have another older kitten at home) and the vet thought he was suffering from the tail-end of
cat-flu, but wouldn't be a huge risk to kitten number one.  So, home he came.

Hannah was completely besotted from moment one.  She is as absolutely blinded by love as a new mother with an ugly baby!  We've had him about a week now, and he's fattened up a bit (you can still feel his ribs though) and his eyes have mostly stopped running.  His tummy has had a little trouble adjusting to real food, so he's sometimes a bit stinky.  In fact, there was a little accident on Hannah's doona cover last night that is still waiting for me in the laundry.  I'm just not going to think about that any more than I have to!!  I've managed to get a pretty cute pic of him here so perhaps its not as obvious, but you can still see from the look of him that he's had a rough start to life.  To Hannah, he is quite simply the most adorable creature in the world!

Of course, he had to have some "bling" - so we went shopping for the best food, and a special collar.  It's too big for him, but he is now dressed like the Prince he is!  Once the eyes had cleared up sufficiently, she insisted on taking him to school to show off to her class.  Being small and furry, they all thought he was cute too - although his size and general scrawniness did get a raised eyebrow and some curious questions from the teacher.  He still has a kind of pinched up, deprived look about him - something about his face and eyes gives it away the most.  But then, he's only been "Prince Nundu" for about a week.

The thing is, Hannah loves him.  He's not only the most well-fed, but the most cuddled and adored cat in, well, just about anywhere!  And if I know Hannah, that's not going to change.  He's going to grow into that crazily royal collar.  His body will fill out and become sleek and healthy.  He's going to lose that ill, pinched-up look in his eyes, and start to really equal the vision of him that Hannah has always had in hers.

Strikes me, that God is like that with us.  We may not all look as obviously deprived as Nundu.  The pinched-up, ugly bits may not be as visible - though sometimes they are.  But if we are human, there are bits of us that don't look so great, and that make us feel anything but "royal".  And God is like Hannah - looking right through the ugly stuff, seeing belovedness and royalty, and loving us totally, unreservedly, and unconditionally until we blossom into HIS truth of who we are.