My dad was a bit of a theologian, and so I grew up with a bit of theological language in the atmosphere.  A "type" in theology-speak is something that creates a picture for us.  Usually it is used in the phrase "a type of Christ", meaning "a picture of what Christ is like".  Some of the "types" I remember learning about were as varied as the rock that Moses hit in the desert (Moses hit the rock and then water came out), the snake on a stick that healed people (yes - that's really in there!) Melchizedeck  (the priest from nobody-knows-where who came and talked with Abraham), the luckless sheep that got sacrificed instead of Isaac, and of course LOTS of the Jewish laws, ceremonies and rituals.


I'm a little hazy on the details now... those conversations were a long time ago, and in any case I'm sure there are varied opinions about them all.  However I love that concept of a "picture", rather than an explanation.


So it got me thinking, what are some modern "types" that speak to me of Christ-ness?


Read more »
Posted by Kerry Miller at 2:01 PM 5 comments: Links to this post

I woke up yesterday morning with a very CLEAR idea of what I was gonna post on the blog... then the day got busy, I didn't do it, and now I'm not quite sure where I was headed.  Don't you hate that??

So... I'm going to put some of my fuddled thoughts out there - but then YOU're gonna help me (Pleeease?  It'll be SO MUCH better if you do!)

It started with a couple of online discussions I've either been involved in or privy to.  Theological stuff  (don't run away now).  One involved the issue of homosexual marriage - a hot topic in Aust. right now (& if you are connected with me on facebook, you no doubt saw the heated debate that went on!)  A couple of others involved "churchy" type discussions about...  well, it doesn't really even matter what they were about...  MY frustration is about the approach we tend to take, to all this stuff.  (& don't tune out if you're not a "churchy" type - I'm talking about people in general).

The thing is, in ALL of these conversations, there was a lot of nitty-gritty, intense discussion, about whether things were, or were being done, or being thought of, the "right" way.  Whether someone's behaviour or views were "correct", or not.

Well I have some thoughts about that.  For starters, when the conversation heads that way, I tend to back out.  Fast.  I think at that point, all is lost.

Read more »
Posted by Kerry Miller at 9:18 AM 13 comments: Links to this post 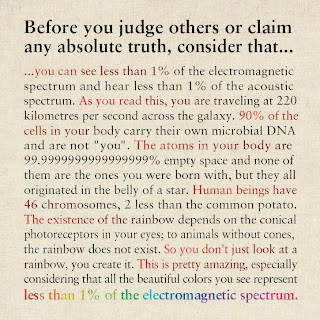 This meme has been doing the rounds of facebook, lately.  And it connects, at least slightly, with something I've been thinking on.  Especially the bit about "Creating the rainbow".  I find it fascinating, that the whole universe of our experience as conscious beings is produced by neurons in our heads.  In actual fact, we each experience our own "virtual reality", played on the screen of our mind.  How much does this equate to "actual" reality?  That's quite a question!!

Read more »
Posted by Kerry Miller at 2:14 PM 8 comments: Links to this post

It's ironic, but for a person who is seeking to understand others better, I am a shocking listener.

It's true.  My kids will shout loud in agreement - it's something they regularly complain about!  Even right now, at this moment, here I am with my head engaged with a computer keyboard, formulating something I want to say - and if my daughter decides she wants to talk to me, she's gonna get frustrated because I likely won't hear her, first time 'round.

Holding on to Questions

Lately, the question of identity has really gotten a hold on me.  It seems to pop up in every deep conversation I have, sticks its curly inquiry into every little blog post - and winds itself in, around and through every piece of fiction I write.

It may be a personal eccentricity, this love for wrestling with questions; but the more I dwell on the idea of identity, the more I'm beginning to see it as something absolutely necessary.  In fact, it's as necessary to identity as breathing is to life.

Love and Freedom in the blogosphere...

Everyone seems to be posting about Love and Freedom today!!  Well, perhaps not everybody, but definitely Alise and Jeff.   It's in the air - so I thought I'd share! 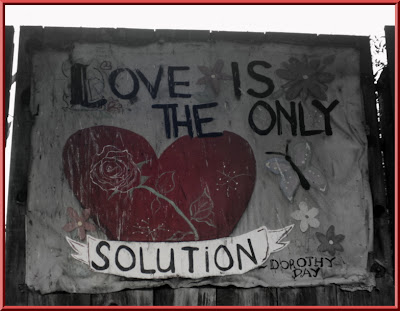 Alise Wright has written about love and freedom in the context of friendships here.

My good mate, Jeff Elkins, is all about Love and Freedom in the Christian faith here.

(& in case you missed it, we recently had some lively discussions on that same topic here, and HERE!)  (the second post probably relates more to what Alise and Jeff are saying)


Posted by Kerry Miller at 11:13 AM No comments: Links to this post

The man lay across the doorway, his head lolling at an awkward angle.  He could have been sleeping off a heavy night.  It was a common enough sight in this part of town, but he gave a restless groan, and his head lifted slightly, revealing a shockingly battered eye and cheekbone.   As he settled back into his appearance of sleep, a trickle of bloody mucus escaped surreptitiously from the side of his mouth, tiny telltale of something far more serious.
Read more »
Posted by Kerry Miller at 12:27 PM 9 comments: Links to this post

Life to the Full?

Well, my dear blogging friend Adrian has been hosting a guest series on his blog, Life before the Bucket, for some time now.  It's called "Life to the Full" & he's invited people to contribute their thoughts on what this means, or how they achieve it in their own lives.

He's called it "How a Worn-out Mum Does it" - because he wanted an excuse to use our Aussie word, "mum".  (I think we Aussie bloggers should pop on over, and leave some more of our great Aussie idiom in the comments section - can you think of a way to work in bogan, fair-dinkum or chook??)

Silliness aside, here's a little introduction to get you started - then head over to Life Before the Bucket to read the rest.  While you're at it, make sure you check out the rest of the series, and Adrian's other stuff - it's a great place to visit!  You might even consider adding your own contribution on living life to the full - I know the series is still open.

Living to the Fullest:  Can a Worn-Out Mum do it? 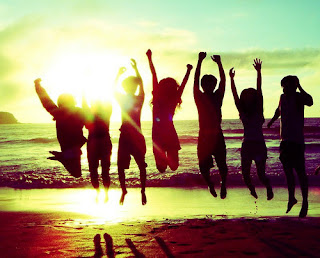 For most of us, I suspect the phrase “living life to the full” conjures up images of active, laughing young people, all healthy and attractive, of course, and possibly participating in some kind of water sport…


Alright, I think the image I have in my mind right now came straight from a Coca-Cola ad.

As appealing as those laughing, perfect images may be, they certainly don’t represent my life. In my case, I’m forty-something (pushing fifty-something). I don’t look good in a bikini. Although I like to be active, I’m not as healthy as I used to be. A few years back I suffered a serious emotional and physical burnout – the result of pushing myself too hard for too long, in too many areas. I am recovering, but still easily fatigued. There is a definite limit to how much “full living” I can pack into each day.

Living my life to the full does not usually involve water sports, extreme experiences, or great “highs.” Not that I never have fun; I am naturally extroverted, so sometimes I do crazy stuff with my kids and with my friends, and sometimes there are parties and fun times. But not all the time. In fact, not even usually. Too much of that stuff and I get wayyy too tired. Usually, things are pretty quiet and mundane.

And I think I’ve finally learned something...   continue reading


Posted by Kerry Miller at 9:45 AM No comments: Links to this post

Good Friday rest from the 'Rest-Fest'

Well, today is that day known (in the western world, at least) as "Good Friday".   For my family, it means the start of the Easter school holidays, and a welcome slowdown, for a little while.

Josh's "Part 2" on Biblical rest was tentatively planned for today, but we'd both forgotten this would be Easter weekend.  I think I'll give him the day off ;)

So...  back to "Good Friday".  Not being one to really make much of special days (of any sort) I wasn't planning to do anything in particular.  I did buy some hot cross buns as a sort of afterthought, yesterday at the supermarket.  (my kids do love them - and it makes a holiday seem more like a holiday if you mark it with something special)

As far as the so-called "Christian Calendar" goes, though, I have mixed feelings about Easter (and all the other "holy days", for that matter).

Read more »
Posted by Kerry Miller at 7:51 AM 3 comments: Links to this post

I've worded the title this way, because I think, just maybe, this could be the beginning of a little series... WHAT IT MIGHT LOOK LIKE IF ______  ... but I'm not sure if I have enough ideas.  If it strikes you as something you'd like to contribute to, let me know!  Some guest posts could be a great way to really re-imagine some stuff!


So... who ARE you?  What are the things that define your identity?  Are you male?  Female?  Gay?  Straight?  Buddhist?  Agnostic?  Christian? Atheist?  (that list could go on forever so I'll stop there)  Are you a single parent?  A Tradie?  A professional?  Are you wealthy?  or... not? Are you creative?  Logical?  Are you black?  white?  Asian?  Shy?  Angry?  Tender-hearted?  Practical?  Intellectual?  I'll let you fill in the blanks!
Read more »
Posted by Kerry Miller at 9:54 AM 5 comments: Links to this post