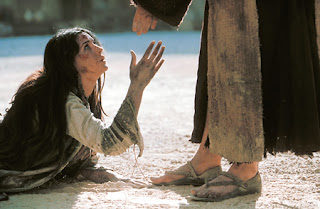 I read this clever take on the old story about the woman caught in adultery, on Shane Clifton's Blog, this morning.

It really IS clever... but somehow, I can't quite agree with it.

Orson Scott Card frames the tension in this story as a tug-of-war between legalism and corruption.  Somehow, "Rabbi Jesus" comes out as having the perfect balance, able to both "preserve the law and forgive the deviation".

Now I might be on shaky theological ground, here... so I'm chucking it out there to see what others have to say... but I don't think Jesus was on the Law/Lenience paradigm at all, at all, at all.  Hear me out... then tell me what you think...
See...  it seems to me that Jesus was always about valuing people.  Valuing them way above laws, customs and local prejudices.  In short; he was all about love.  And laws...  well, shouldn't they be about preserving the rights and dignity of human beings?  And if they are, don't they become kinda redundant when love is our guiding force?

I guess I'm packing a lot of ideas into a small space here, but if you look at any system of rules created by people, the great flaw seems to be that actually relying on the rules does nothing but create the need for... more rules!!  When our focus is on what is legal and what is not, we just find more loopholes, that need more plugging up, which leads to more loopholes and complicated interpretations and so on until the "justice" system becomes anything but just!

BUT...  If our focus is on ensuring that people are cared for in our society, that their voices are heard, and their needs are met...  then, the rules don't matter nearly as much.  To the extent that we as a society really live out these values, we reduce our need for "rules".

Even our clogged-up legal system recognises this.  See this article on restorative justice models used in Australia.  There are some exciting programs, particularly for young offfenders, that involve conferencing with victims and their families, and mutually negotiating ways to make amends for the damage or loss that they have caused.  Of course, there are many situations where this isn't going to work, however the way in which these programs put a human face on both offender and victim is recognised as a huge factor in their success.  They move the focus away from rules, and back where it should be - to human relationships!

There is evidence to suggest that these approaches do reduce the level of re-offending, and that both offenders and victims are generally satisfied that the outcome is just - at least, when it is done well.  However, systematised approaches like this are always going to have their weaknesses.  The most glaring, being, that they rely on the good will of both offenders and victims, and their desire to bring about restoration.  The authors make the point that such models assume that those involved are coming to the negotiation table with attitudes and skills that prepare them to communicate clearly, and envisage just solutions.  That is a huge assumption!  The truth is, that in our culture, healthy models of love and justice are rare.  In the words of Daly and Hayes:

"The most fundamental challenge to restorative justice, then, lies in awakening new cultural sensibilities about the meanings of “getting justice” and of “just” responses to crime."

For me, that's where stories like the Jesus story are so incredibly important.  They help us to re-imagine our society, culture and values in the language and illumination of love.  They take us beyond rules, customs, right, wrong, in-group and out...  and help us to see how we can value and care for one another as human beings who are intrinsically worthy of love.

Perhaps, Card is not completely off track, though.  I don't think Jesus was "balancing law and anarchy", but the only thing I can see, that takes us out of the whole law&order vs. chaos tug-of-war, is love - and he embodied that.  I know I'm an incurable idealist, but if we could all somehow "get" that, laws really wouldn't be needed!
Posted by Kerry Miller at 1:38 PM