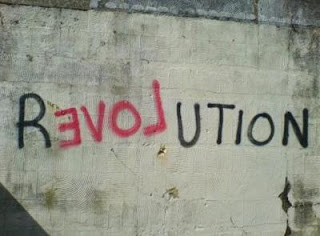 Recently I've been involved in some online discussions regarding the issue of same-sex marriage.  In the first, I posted what I thought was a fairly innocuous comment on facebook, in support of marriage equality.  The reaction was... astounding!!  I was quite unprepared for the level of vitriol - and the most vitriolic responses invoked "God" as their justification.  Ouch!!

As far as I can discern, "The Way" involves radical love, forgiveness, and through these, the redemptive embrace of our own broken reality.  If followers of this "Way" are marked by their radical love for others - what are people following, when they are marked by radical opposition to perceived "immorality"?  Take a breath, right now, if you are thinking "yes, but...", and read that again - slowly.

A phrase from the New Testament has been sticking in my head, in regard to this whole thing.  It's from Galatians (I looked it up to check!) it talks about the characteristics of love; the first part is well known - most of us have heard it read at weddings, it gets bandied about quite a bit;  love is... patient, kind, not boastful, arrogant or rude, keeps no record of wrongs (now there's a challenge!) always hopes, trusts, perseveres...  you know the one - and ends with the observation...  "against such things there is no law".

There is no need to defend love.  What's more, there's no defence against it.  "The Way" is something quite outside moral codes, and operates in a completely different paradigm to that of legalism and judgment.   I'm hearing lots of fearful talk coming from the "Christian Right" (now there's a telling "label") about the possibility of religious leaders being prosecuted for speaking against immorality, and laws being passed that will repress Christians.  Here's the thing:  There's no way to legislate against love.  None.

Forget (just for a moment) about whether homosexuality, abortion, or any other passionately contested issue is "right", or "wrong" - and have a think about what your interactions are "marked" by.

If what is coming across is judgment, not love - there's something wrong with the picture.

And, yes, I think it really IS that simple.
Posted by Kerry Miller at 10:41 AM