This week's contribution to the "Rest Fest" comes from my little bro, Josh Miller.  I've been saving this as a little treat for you all (perhaps not so much for him ;) but here is a photo only a sister would put on the internet: 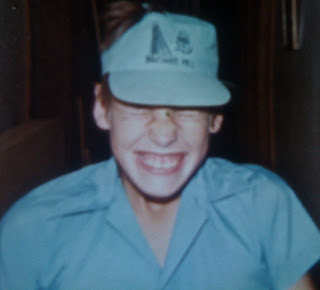 Josh is (or was, until quite recently) a pentecostal pastor.  For some time he has been on a journey away from institutional religion.  Josh and I often bounce around theological ideas...  I would have to say that he has been one of the main influences in my journey through Christian faith, over the last decade or so.  You also have Josh to thank for the fact that I blog - it was he who introduced me to the blogosphere.  His (unfortunately, now long unused) blog can be found here.

for some of you, his thoughts on rest will sound a lot more specifically "Christian" than a lot of the stuff you read here - but I think it is good to see what an orthodox, Christian understanding of rest looks like (especially since I myself have been labelled somewhat of a heretic, of late!! ;)  Interestingly, I see parallels with Andrew's recent post on rest and Buddhist meditation and mindfulness, and Ian Metcalfe's post (the very first) on rest as a state of mind.  See what YOU think!

The Way of Rest
- Josh Miller -

Well, my sister has asked me to write a piece on Biblical rest.  Though I’m not convinced I’m the most qualified to write this I am convinced that if we don’t understand rest then we don’t understand the Christian concept of salvation or the essence of the Scriptures.  I also believe that ignorance/neglect of this concept has led to a whole lot of destructive behaviour in the name of faith.
This might also make some sense of where ‘dos’ and ‘don’ts’ fit into the concept of freedom, though I will seek to make more of this in the next installment (coming next week, hopefully).

To begin with, I'm making some assumptions.  Firstly, that God is. Not because I’m convinced you all believe this, but because the Scriptures are not preoccupied with convincing us that ‘God is’ but rather ‘what God is like’ so I shall take the same line.  Have you ever heard it said ‘ I can't believe in a God that is like …..’?    I'll endeavour to reveal a little of what I believe God is like and I'll leave the believing up to you.

On this basis let us also assume that God is at least the co-author of the collection of writings called the Bible.  If this is the case, there should be a common message or theme running throughout its many writings.  This means, then, if we take a passage and run with it - but our understanding of it is contrary to the overall theme or ‘revelation’ in the rest of scripture - then our interpretation of that passage should be reworked or discounted, at least in a life application sense.

Let us also assume together, for the sake of humouring this author and for space and expedience, that the Messiah revealed in Scripture is entirely the point; that He represents the ultimate revelation of what God is like, that His message is THE message, that the writings previous to Him were working up to and preparing the way for Him, and that the writings consequently are the story of a young church seeking to come to terms with His teachings.

Now, with those things stated - What about Biblical Rest?
A Sabbath rest is not often talked about in modern Christianity but it’s a BIG DEAL in the Scriptures!

The prophets make a lot of noise about Sabbath observance and often link God's blessing, or God-forsakenness with whether or not His holy day is observed (Isaiah 58:13-14).

Sabbath is one of the Ten Commandments and is often spoken of separately to the rest of the commandments e.g. 'Observe My Sabbath and keep My commandments’.

It is the first commandment given before the law, in the story of the manna in the wilderness when the people were taught to trust in God's provision, rather than their own resources.

It features in the Creation Poem at the start of the book, so we can conclude it to be foundational to the message of the book.  God declared all that He had made to be good but nothing is called holy except rest.  So true holiness appears to be linked to the idea of rest.

Jesus' claim in Mark 12:8 that He is “Lord even of the Sabbath” validates this concept and tells us that it is somehow connected to His Sovereignty.  The Jews understood, as they do today, that Sabbath was a picture of what it would be like when Messiah has come.

So how did Jesus treat the Sabbath?


The Scriptures tell us that Jesus knew no sin, yet He constantly broke the law.  In particular, He often came into contact with the unclean in the form of sinners, lepers, dead bodies, a women who was bleeding, not to mention those who were simply culturally and socially despised.  Yet He made no attempt to go through the required time and ceremony of purification.  Actually, purification seemed to come to these people through healing, cleansing, acceptance and value.

Of greater angst to the religious elite,  Jesus constantly broke the Sabbath.  Amongst numerous examples, the story of the man born blind in John 9 is perhaps the clearest, of Jesus' law-breaking-with-intent.  In the culture of the day, if a person was sick or poor it was considered to be a result of their sin.  In other words, it was their fault so you really had no responsibility to assist them (this is more in line with Karma than with the Torah, but we find a similar attitude throughout the third world and areas of poverty amongst the irreligious in the west today, indicating it has more to do with human nature than religious affiliation).  Someone being born blind posed a problem to this way of judgmental thinking, and so the disciples questioned Jesus. “Who sinned, this man or his parents that he was born blind?” The Pharisees reiterate this popular view later in the chapter when they throw the man out of the synagogue with the retort “You were altogether born in sin and do you teach us?”.

Jesus' response to the disciples' question is to not only refute the claim that the blindness was a result of personal sin, but as if to point out the religiosity of the claim He proceeds to heal the man on the Sabbath.  This was understood to be breaking the law.  Jesus' actions were not coincidental - it was considered to be breaking the Sabbath to spit.  The logic was that if you spat, you would make mud; if you made mud you could make bricks, and making bricks was clearly breaking the Sabbath.   Additionally, brick making was culturally reminiscent of their labour in slavery.  Jesus spits, makes mud, wipes it on the man’s eyes, then tells him to go and wash.  The man obeys and is healed.

Jesus makes some sense of His stand on Sabbath in Mark 2:27 when He claims that the Sabbath was made for man, not man for the Sabbath.  He isn’t rejecting Sabbath but is claiming that its good for us (work 7 days a week for a while and you’ll discover He is right) and also, I believe, that it is a sign for us.  His continual breaking of it in order to do good to people is more in keeping with the concept than the letter (See John 7:23-24.

Paul seems to water down Sabbath in Romans 14 by giving permission to esteem all days alike, and even seems to say that considering one day more holy than another indicates a weaker faith.  I don’t believe he is dismissing the idea of Sabbath, but that he is applying the idea to the whole of life because, after all, Messiah has come.  It’s more about a state of being than a day to be observed.

This is in line with the letter to the Hebrews that claims that there remains a rest for the people of God (Heb 4:9). That rest is ceasing from our work (4:10) and faith and rest are essentially the same thing (4:3).  Actually the only thing the new testament writers implore us to strive for is to rest (4:11).

In Heb 6 we are told that our starting point is repenting from faith in our work and having faith in what God has done for us.


It’s said that the Puritans would not allow a new Christian to serve, for a period of two years, because they needed to learn to rest before they could work.  They needed to learn to ‘be’ before they learned to ‘do’.   You see, Christianity is not about what we do, it’s about what Christ has done for us.  For all of you "doers" out there,  before you freak out too much,  yes the Bible has a lot of "dos", but the doing is a reflection of our relationship with Father God. Consequently, doing wrong by others is a reflection or consequence of a wrong relationship with Father God.  This is why whenever Jesus was asked the greatest commandment He replied with something along the lines of:

This is the first and great commandment.

And the second is like it, You shall love your neighbour as yourself.

On these two commandments hang all the Law and the Prophets.

It's worth noting that neither of these commandments are amongst the big 10.
He gave the two, not one, because the second is the reflection of the first.  In fact, John writes in 1 John 4:20 "If anyone says he loves God and hates his brother then he is a liar."

Jesus also gives us here a key to interpreting the Scriptures as he claims these two commandments as the lynch pin for the whole book.

This makes sense of Jesus constantly breaking the law and the Sabbath by doing good to others.  The legalistic observance of the ritual at the expense of your fellow man denies the very truth the ritual signifies.  To celebrate our deliverance from slavery by requiring someone be left in bondage just doesn’t make sense.
For me, being a Jesus follower is not about what I do or don’t do, or any rituals I observe.  It’s about resting in God's sufficiency for me and allowing that truth to affect my behaviour. It’s a state of being that effects my doing.  If the idea behind Sabbath is to be resting in God's amazing grace and love, then how can we not be compelled to reflect that same grace and love to others?

Email ThisBlogThis!Share to TwitterShare to FacebookShare to Pinterest
Labels: rest