I & my kids spent most of the last week at my brother's house, taking care of my nieces and nevvies, while Josh and his lovely wife were off holidaying  (lucky them)!

While I was there, "playing auntie" I ferreted through Josh and Caro's DVD collection, and found a copy of  Çlint Eastwood's "Gran Torino" - a movie I'd always wanted to see but hadn't gotten around to.  I watched it after the kids were in bed.  It. Was. Beautiful! 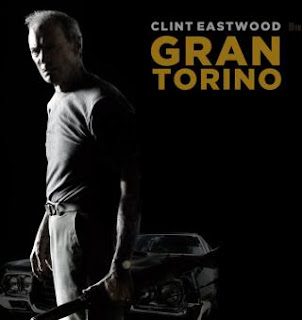 I blogged a while ago about "types of Christ", mentioning a few I'd seen in movies.  Definitely gotta add Walt Kowalski (Eastwood's character in Gran Torino) to that list.

Seriously - I've been wanting to write some kind of story, of a character who surrenders, gives his life for others - and triumphs in a lasting way - and where "death" of some kind (not necessarily of a person) becomes the gateway to life - but hadn't found the "vehicle" for the story - and Eastwood well and truly beat me to it!!

I know it's not a really recent movie - so I'm (as always) "behind the times", "missing the boat"and all that...  I'm very often slow to catch up with these things - but this was a story that REALLY resonated with me.

For those (like me, until a couple of days ago) who haven't already seen this excellent film, Eastwood plays Walt Kowalski, a Korean war veteran, racist, disgruntled with life, disconnected from his family, and recently widowed.  He lives in a neighbourhood that has become an immigrant ghetto, is overrun with gang violence, and in which he is a minority as "white American" resident.   His neighbours are a Korean family who he refers to as "Gooks".  He dislikes pretty much everyone - especially them.

As the story develops, he gets to know his Korean neighbours, becoming especially attached to Sue, and as the story progresses, her brother, Thao - early in the story, a  local gang tries to induct Thao, setting the theft of Kowalski's car - a vintage Ford "Gran Torino" as a kind of initiation.  Kowalski catches Thao in the act, and prevents the theft using his army rifle - the same one he used in Korea.

To counter the shame of Thao's actions, his family insist he perform a kind of "penance" by working for Kowalski to make amends.  Kowalski puts the youth to work, doing good deeds in the neighbourhood, and in the process, becomes attached to the boy.

But the gang has not let Thao go.  They try to intimidate him by force - burning his face with cigarettes and threatening more violence.  In spite of Thao's protestations, Walt insists on retaliating; finding Thao's cousin ( a member of the gang) and beating him; promising more violence, if there are any more attacks on Thao.

Thao (unaware of Kowalski's involvement in the escalating violence) looks to Walt for a solution.  Walt talks to him about vengeance, about the reality of killing another human being, and then locks Thao in his basement, proceeding to "deal" with matters alone.

Kowalski proceeds to the apartment blocks, where the gang members live.  He parks his vehicle, calls them to come out, and they do.  As the scenario unfolds, neighbours gather to witness the scene.  Kowalski baits the gang members, leading them to believe he has come to shoot them in retaliation for their actions towards Thao and Sue.  As he reaches into his jacket for a lighter, the gang members gun him down, thinking he is reaching for a weapon.

Kowalski falls to the ground, arms outstretched - his body in the shape of a cross.  In his hands - his army lighter.  He was unarmed.

Thao and Sue (having released her brother from Kowalski's basement) arrive on the scene in time to discover that Walt has sacrificed himself.  However, this time "there are witnesses".  The gang members are going away for a LONG time.  Thao and Sue are free.  In the final scenes, we find that Walt has left nothing to his family.  His house has been willed to the Church, and his Gran Torino and his dog, to Thao.

Gran Torino is an utterly believable story of self-sacrifice winning over violence and force.  Kowalski himself takes the duration of the film's timescale to realise this.  However in the end - love triumphs - and really DOES transform everything.